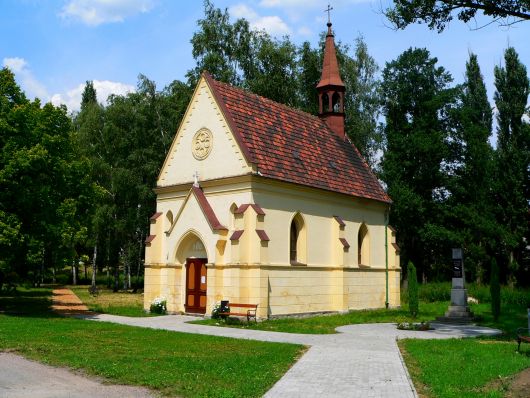 Historical part of the municipality is about 400m right from the flow of the river Radbuza between Chotěšov and Dobřany near the brook Dnešický, which flows into the Radbuza river down the village.
The earliest recorded mention comes from 1243. Ancient free homesteads gradually became the property of the convent in Chotěšov (1212- 1271). Peasant houses arouse by their dividing and they are grouped in a circle. Last free homestead, which was located 1km south of the municipality, was bought by the provost of the convent Michael Kastl in 1668. He had a pond built on the lands near the brook in 1670. Today it is called Kastelský pond. At the end of the 19th century a coal mine was founded near the pond. Mining was in process between 1893 and 1903. This part of the municipality has had the name Bayer´s mine (Bayerka colloquially).
The chapel in the square of the village comes from 1906. Concerts and exhibitions take place there now. Pedestrian metalconcrete vaulted bridge over the river Radbuza comes from the 1920s. In the 1960s Kastelský pond was tidied. At the same time a new pond Nový Vstišský was built above the old one. The municipality has 396 inhabitants owadays.