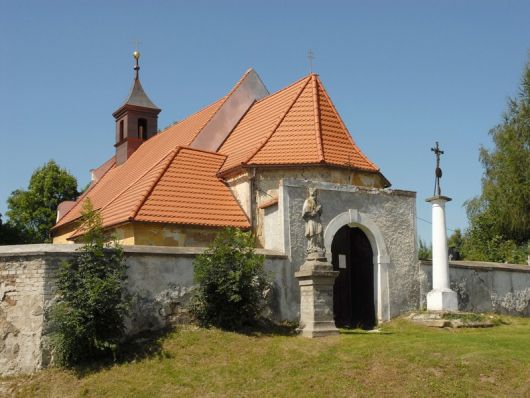 A large village located 8km southwest of Dobřany lies in a wide and shallow valley of the Katanský brook between two massifs covered with woods. Residential houses are usually ground with gabled roofs.
The villages is first mentioned in 1243. In 1250 the House of Chlumčanští from Přestavlky is mentioned in the newspapers. In 1677 the village was a manor in the property of the convent in Chotěšov. On the base grounds of the original fortress a baroque castle with a garret roof was built. The village splits into two parts by Přestavlky pond. On the northern side is the castle with the square, on the other side is the church with a churchyard.
In the barrier of the churchyard there is a vaulted gate. Middleaged, originally gothic church of St.Peter and Paul was mentioned in 1384. Later it was rebuilt in baroque style. The high alter with the picture of St. Peter and Paul comes from the middle of the 18th century. Last reconstruction worth mentioning was accomplished in the 19th century.
The facade with windows was changed and a new roof frame was lifted up. After German inhabitants left, the church stopped to have religious function. Although it was declared a cultural sight, the building was badly damaged. The church is in full reconstruction now.
Restoration of the alters, changing parts of the roof frame, new roof, new facade and draining were finished in 2004.
Lažany – divided into Upper and Lower, lies about 6km from Chotěšov under the massif of Black Hills covered with woods. The village was first remembered in 1250, when it belonged to the convent in Chotěšov. In Horní Lažany a wooden bell tower from 1899 is located. Dolní Lažany reminds of a group of former homesteads around a small pond. In the barries of one of the farms a bricklaid chapel from 1905 was preserved. 105 permanent inhabitants lived there in 1930, today it is 196 inhabitants.