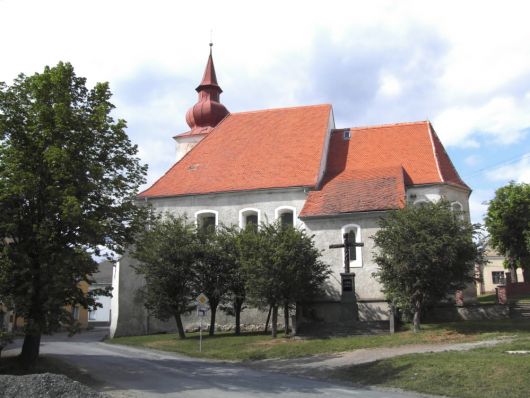 The earliest recorded mention of the municipality comes from 1359. In 1459 Dobrohost from Ronšperk bought the homestead and built here a late gothic castle. In 1502 Dobrohost promoted Poběžovice a town and renamed it Ronšperk.
An important owner of the homestead was also Matyáš Wunschwitz, who rebuilt the castle to a chateau. Matyáš was a great admirer of St.Jan Nepomucký, so he invited the sculpturer Jan Brokoff to Poběžovice. He created a model of the sculpture of St.Jan Nepomucký. The most famous sculpture created according to this model from Poběžovice is the statue of St. Jan Nepomucký on the Charles Bridge in Prague. In the times of the House of Thun Bedřich Smetana worked in the chateau as a music teacher. At the turn of the 19th and 20th century the countess Mitsuko lived in Poběžovice. She came from Japan and she moved to Poběžovice with her husband Heinrich Coudenhove-Kalergi. They had 7 children, the most famous was Richard (born as the second child), who was the founder of Paneuropean Union. Paneuropean union is thought to be the forerunner of current EU and Richard is called „The father of the idea of united Europe“.
To important sights belongs the chateau Poběžovice, which was confiscated from original owners after the war and soldiers - boarder guards settled here. They damaged the chateau quite a lot, but much worse was when they left it in the 1960s. From that time the chateau was empty and decayed quickly. Since 1989 the chateau has been under demanding reconstruction. Although reconstruction is still in process, the chateau is in selected onths open for the public. You can see some reconstructed rooms with exhibitions, wall paintings and you can visit the tower from where beautiful views of the countryside are seen.
Near Poběžovice jewish graveyard is located. It decayed for a long time and was damaged badly. In 2006 its reconstruction started and since 2007 it has been open for the public. It is difficult to determine its age, it is reckonded to be 440 years old. The oldest found gravestone comes from 1634 and is also the oldest jewish gravestone of the Domažlice region.