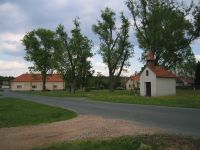 The village is located 5km north of Dobřany. It was founded in 1652, when it was established as an agricultural village with many smaller agricultural farms. In the middle of the square of the village there is a small four-sided chapel. 1km southeast stonecoal mines can be found. In the beginning of 20th century mining started, which led to the growth of the number of inhabitants. During the Second World War Nová Ves was together with Dobřany cruely damaged by British bombers, that chose it for its aim instead of Škodovka in Plzeň. In 1952 an airport base for jet fighters was built near Nová Ves and was in use till 1997. Between 2002 and 2006 water duct and sewerage were built in the village.
Currently 235 inhabitants live in Nová Ves. In summer time a lot of tourists come here. There is Volunteers Fire Department, Tennis club Nová Ves, and sports club Hockeyball Nová Ves. Many cultural, social and sport events for young and old take place the whole year through: masquerade, Firemen ball, Children´s Day, Firemen challenge cup competition, graphic days for children, Sventek´s sports afternoon, Halloween, Christmas parade…
There is a shop, a restaurant, 6 tennis courts, a volleyball court and a pond on the edge suitable for swimming.