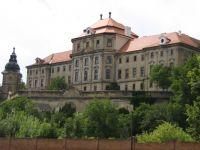 The town belonges to the oldest ones in the region, because it was first mentioned in 1115.
It is located 18km southwest of Plzeň. In all published variations of its name Chotěšov originally meant a court of a man called Chotěš. So it is an owner (founder)-derived name and meant Chotěš´s court.
Chotěšov developed mainly after the Premonstratensian convent was founded by blessed Hroznata around 1200. The convent was at its top at the end of the 14th century, when over 50 municipalities in the neighbourhood and around the towns Stod, Staňkov and Dobřany belonged to it.
In the Hussites times and during the thirty-year-long war the convent was conquered and plundered several times: in 1278 Ota from Brandenburg, in 1421 Jan Žižka, in 1618 Mansfeld, in 1620 Polish troops, in 1639, 1645 and 1647 the Swedes. However, it had been always reconstructed afterwards. It was reconstucted to its current design according to plans of Jakub Auguston jr. in the 18th century.
Frescos were created by František Julius Lux from Plzen between 1754 and 1756. In 1782 the convent was closed by Joseph II. and in 1822 it was sold to the House of Thurn-Taxis from Regensburg. In 1877 the convent was rented and later sold to Celestine nuns of Visitation of Virgin Mary. They founded a finishing school and a private church school for girls. The finishing school was closed in 1938. In the times of the Second World War the convent served as a lodging house for women who were in total labour intake. At the same time there was an alms-house, which was closed in 1950. 31 nuns and 80 patients were moved out to Litoměřice and the property was taken by the Czechoslowakian army, which used it as barracks until 1975. Next the convent was maintained by the district centre board State Monument and Nature Protection in Plzeň. On 1 August 1991 a part of the property was given back to the order of Visitation of Virgin Mary, a part was given to the municipality Chotěšov as historical property. On September 4, 2002 a trade of the convent property was made, nuns gave the convent to the municipality, the municipality transferred the office of the woods to Plzeň diocese , the nuns transferred the garden in the lower part also to Plzeň diocese.
Located in the town is the church of Birth of Virgin Mary, which was built on gothic base in 1745 – 1747. Other historical sights include two sculptures of St.Jan Nepomucký and Marian column from the end of the 17th century. Connected with the town by history is former pilgrimage place Křížový vrch, where a viewtower has been reconstructed.
Agricultural character of the town and surroun-ding was changed into industrious by stone coal findings in nearby Mantov. The mining decayed in the 1930s. These days secondary industry of the town is represented by the company MD Elmont, s.r.o. employing more than 1300 employees in four production halls.
Today Chotěšov has together with associated municipalities Mantov, Losina, Hoříkovice and Týnec 2624 inhabitants. The antlers in the town symbol - from the crest of the House of Hroznata, blue colour – Radbuza river, yellow colour – golden shield and octamerous star – symbol for the birth of Virgin Mary.