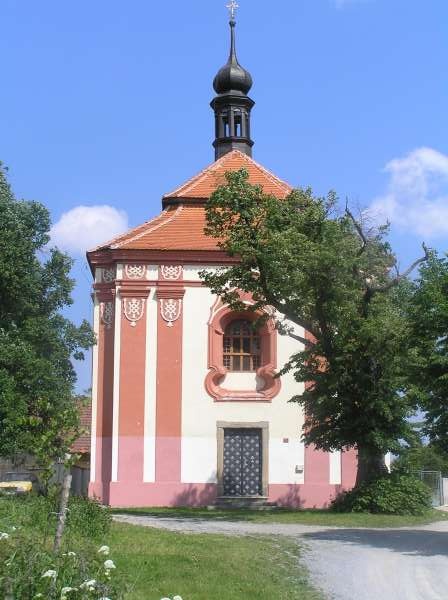 The town lies 388m above the sea level (other sources state 382m) about 7km northwest  of Přeštice and 15km southwest of Plzeň. The history of the town started surely before 1379, but the first written trace comes from this time and was found in the financial register of Plzeň region. The town first belonged to the property of brothers Petr and Racek written Chlumčanský from Přestavlky. After it changed its owners it was connected to the Dolní Luky land.
From this time (1746 – 1749) the baroque chapel of Virgin Mary the Helpful comes. The town lacks cultural monuments, so only rests of originally knigt fortress of the House of Chlumčanských from Přestavlky in so called „Kazamát“ (house number 24) can be named.
Another sight is a small chapel from the 18th century, which was made the first east corner of the graveyard, and five different crosses spread over the town and its surroundings. Original purely agricultural face of the town was changed in the last quarter of the 19th century by a sudden development of the town. This was mainly due to the development of ceramic industries and to caolin mining. The mining has been in process without a break since the end of 19th century.
An important house is also the school. The founding stone was laid 13th August 1913 and
in those times the new and modern building was approved 20th October 1914. After an extensive reconstruction the schooling of nine grades started in 1965 in an added pavillion. The town with quite a big residential quarter from the 1960s is today noticeably industrious, as there are apart from ceramics companies other businesses, one producing aeroconcrete building components and two smaller ones on the northern side of the town next to the road in the direction to Dobřany.
A settlement called Hradčany, which is 3km east of Chlumčany and 469m above the sea level, belongs to the town. The settlement was founded in the 18th century in 1786 in the place covered originally with woods. At those times it belonged to land register Líšice. In the middle of the settlement is a small chapel reconstructed in 1990. The peace and beautiful views of the countryside up to the foot of Šumava mountains attract visitors to hiking and cycling.
Currently, 2400 inhabitants live in Chlumčany.